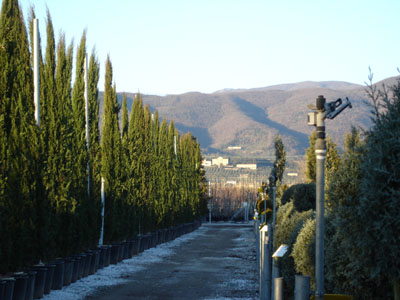 Pistoia in January. Really cold but glorious sun. A selection of Cupressus
sempervirens, the classic Italian Pencil Cyprus. A nursery with a view to die for.

Tracy Wilson returns from a visit to northern Italy

My usual penchant for a disaster in the travelling department struck with the plane being two hours late and my arriving at half-past one in the morning! I landed in Pisa, which is very near to the coast. I got off the aircraft to feel rather as if Id walked into an oven, giving me some indication of what I was going to be faced with for the next few days. If you land in daytime youll see that the indigenous tree population is almost entirely pines  Pinus pinea: it is very widely used in Italy, making a rather dome-headed tree. It almost reminded me of a Martian landscape, I think, for want of a better description, but dont ask me why. These pines will tolerate virtually anything the sea can throw at them. But you have to bear in mind that in Italy not only are they contending with the salt but also with a very much drier, harder climate than we have over here in Britain, especially compared to down here in the south-west. So it is a very different setup, and the Italians have a much smaller plant base to work with than we have over here. Its only really when you go to countries near the Mediterranean and you see the plants that are being used  whether theyre native or in peoples gardens  that you realise the wealth of diversity of the climate that we enjoy over here in the UK and the range of plants which it gives us to grow.

The Italian coast, especially around central and northern Italy where I was, is almost barren really, very sparse in a lot of places except where its been cultivated. I would not say that gardening is a national sport in Italy  its mostly down to survival! They have their Olives, and thats about the size of it, they can put them in and forget about them, drench them once a year and thats about it. The soil is quite shallow but its also the sheer drought factor and the heat that are the real problem. The soil is very sandy and loamy, you dont get a lot of stone in it (which, if you gardened in Cornwall, would be an absolute joy!) If you look around any of the gardens and the nurseries there, youll see they all have channels around the edges of the beds, which are fairly small, and they flood them regularly so that they irrigate them and the water gets down to the root system of the plants. They dont use overhead irrigation at all in open ground, only in pot nurseries, but where possible they use capillary beds and flooding as a more economical use of the water. 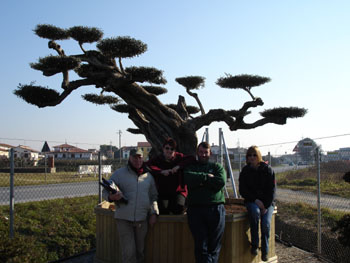 A stunning cloud pruned Olive, possibly as old as a thousand years!
My friends and I had to pose by this one "by it " not "buy it"!

The main plant species that you see growing over there on the coastal fringes are ones which you might associate with, to some extent, places like Tresco and the far west of Cornwall. Theyve obviously got the pines. Theve also got the lovely Cupressus sempervirens stricta, which is the Italian Pencil Cypress which are so exotic in a Tuscan landscape, looking absolutely gorgeous; and of course Cupressus as a group is one of the best conifers for coastal areas and is very happy to take almost anything the sea can throw at it. But bear in mind that with the Pencil Cypresses, because youre looking at essentially a structural tree, with a very slim, tight column, if it gets all blown out of shape and distorted then you really do lose the beauty of it. Theres no point having it somewhere where it will really get smacked about by the wind and where the actual shape of the tree is going to get spoilt. If thats the case, then you might as well go for a different variety of Cupressus which bushier and isnt going to take that sort of structural damage (although the plant itself is happy enough to survive it). As for other trees growing in this area, theres a lot of Quercus ilex  the Holm Oak  and that is one of the toughest trees which we would often recommend for a coastal situation over here  but over there its taken to a new art form. You can have Quercus ilex in any shape or form or size you like: you can have them as pleached trees, you can have them as clipped cones, you can have them as cylinders on a stick. You can have them just about any which-way. To shift them as big trees, in the nursery trade over there, you can have trees with a diameter size of ones thigh  and with big, meaty heads on them. These will be growing in tubs of 1000 litres of compost and anything up to five metres tall  Ive seen them up to 7 metres. The nurseries will be very happy to sell them and transfer them into the UK, laying them down in the lorry and then laughing hysterically when you try to get them off at the other end!

These trees grow naturally inland in Italy as well in the coastal area. They do grow into very large specimen trees because they get such a long growing season, compared to over here  they can get two seasons for the price of one of ours over here, and it does make a big difference. You can go over there and buy a bigger tree for the same money as youd get over here. Of course you become accustomed to getting better value for money, very often, which is the whole reason for the nursery industry over there and why it is so important to the UK. You do see quite a lot of Quercus ilex growing in the coastal areas and doing very well. Quercus ilex is seed-raised, so its variable and there are obviously different clones in different areas of Italy. Some have fine leaves, some have quite broad leaves: similarly if you look round the UK youll see the same range of foliage, some more glaucous than others. Theres one thing you do notice over there, all the trees have a much greater intensity of colour than we do over here. The Blue Cedars are blue, strikingly blue. If any plant has a bloom on its leaves, that bloom will be much more pronounced, much more white or whatever the colour may be. This is really just a result of the very hot sunny weather that they have over there  it intensifies the leaf colours and really does make quite a dramatic difference. 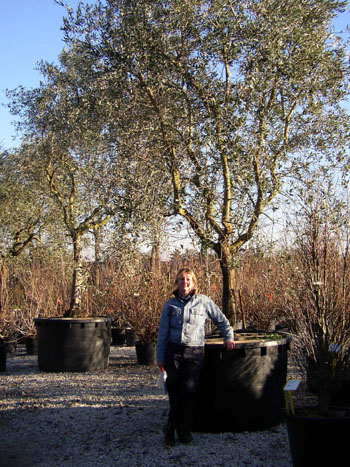 Traditionally pruned Olives with open centres.
This tree we actually purchased and brought home to the nursery.

When you get away from those varieties, there arent a lot of trees that youll see growing natively, with the probable exception of Piceas. You see quite a lot of those although they tend to be away from the immediate coastal area, theyll be a little bit further inland. So those are the main tree groups that youll see. The other thing which does reach tree-like status there, although we dont tend to think about it like that here, is the evergreen Magnolia, Magnolia grandiflora. Ive seen trees of probably 30 to 40ft tall (9-12m), absolutely fantastic; beautiful, natural pyramids of the tree as grown, full of flower at this time of year  wonderful lemon-y flowers. To be fair they were largely finished when I went over there, because of course its hot, dry and sunny and everything is a little bit further advanced over there. Whilst they were still in flower when I came back, they had more or less finished over there. The perfume you get from them is staggering. They would perform quite well and make an in-between type tree  neither one thing nor tother as far as theyre concerned.

A lot of other flowers on the coast, especially south of Pisa, are Mediterranean-style things: so you get a lot of Rosemarys (including Prostrate Rosemary, the white one), Lavenders and the aromatics  Santolinas, things that will tolerate the very hot, dry conditions and dont need a huge root-run, because they havent got very deep soil. They seem to thrive quite well. And again, why is it that Italian tomatoes have flavour as do the Italian herbs and Rocket salad  lovely. All the herbs in Italy  pick a leaf, theyre far more pungent because the sunshine concentrates the essential oils in the leaf and you get a much, much richer perfume from them. You know yourself, if you have a Sage growing in a sunny position, on a patio maybe, and one growing in a shady position in a richer soil, the one thats struggling on the patio is the one thats going to smell nicer  even though it may look a bit wisht! Its just that concentration that really does make a big difference with them: so theyre very happy plants and youll see a lot of those grown. As for Lavenders, amusingly enough they only grow the angustifolia, which is traditionally known as Old English Lavender. They very rarely have any of the named varieties over there, normally just a few seed-raised ones: you dont see a lot of the French Lavenders at all. In all honesty, once you get south of Pisa its too hot for Lavender. You tend to think of pictures of Tuscany with these lovely fields of Lavender drifting down across: it doesnt happen in southern Tuscany, believe me  you might get them in northern Tuscany but not in the south, its just too dry for them. But you will also see quite a lot of plants like Agaves and Aloes, viciously growing in the most peculiar places: youll find a roundabout thats got three massive great Agaves on it  its a bit difficult to know have they arrived there spontaneously or have they been deliberately planted? They have a very strange attitude to gardening on the Continent. But then to be fair, the people on the Continent probably think the British have a very strange approach to gardening!

One thing I did find hugely interesting. We went up to Lago Maggiore for a couple of days. Whilst its not strictly coastal, it is waterside. The planting up there was absolutely stunning. It really felt a bit like coming home because you had the mixture of things like the Trachycarpus palms and Agaves and Chamaerops with Ligustrums and Sycamore and Ash and what we think of as British temperate plants. It was a very weird mixture and strangely British if it werent for the fact that there were these great big mountains hanging round the edges! It looked absolutely fantastic. (Click here for second part)