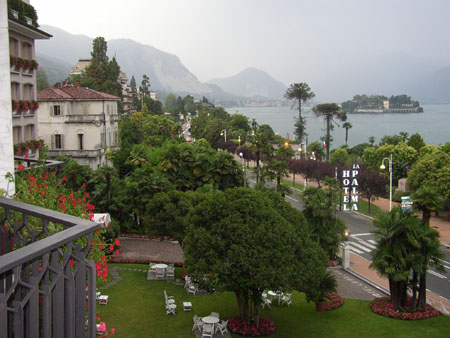 Lago Maggiore. One of the beautiful lakes in Northern Italy.
Talk about a room with a view! So much of the planting was reminiscent
of home, with the spectrum from exotic to hardy.

Lago Maggiore (Lake Maggiore) is in the north of Italy on the Italian-Swiss border. As you approach Lago Maggiore you really do notice that the plant life changes dramatically from the southern, Mediterranean feeling that you have in the centre of the country. You could be forgiven, as you drive around the edge of the lake, for thinking that it is in fact a bit like being in Cornwall, because the plant life is very similar: its a bit like being home from home. I had a close look around it, trying to discern what the differences were, and they werent obvious. When you drive into the towns like Stresa and Verbenia you will see beautiful specimens of Trachycarpus fortuneii growing alongside Ligustrum lucidum and Sycamore, Ash, and Rowan. Birch also grows very beautifully up there. You will also see Chamaerops humilis  a sort of dwarf fan palm. But youll also see Bananas and Cannas growing very freely, and Figs in full fruit production. Around Lago Maggiore there were Lagerstroema: they don’t come in named varieties like we do, they just basically have a pink one and a white one and a red one. They’re hardy enough, they’ll grow over here but they just never flower over here, because we just don’t get the hot dry autumns to make them ripen properly. They look particularly lovely – big and flumptious and fluffy, I suppose a bit like a Continental form of a Thorn Tree, very beautiful.The main thing that was missing was the Cordyline australis  the Torbay Palm or Cabbage Palm. Strangely enough, I didnt see any Citrus: when I enquired why, I was told because it's too cold. I was thinking to myself Hang on a minute, there are things growing up here which dont really like it very cold!

As consequence, it was quite interesting to see which things did or didnt grow and why. The only reason I can think of was that it was a harder, dryer cold which seems really quite different. They had things like Agave americanum  and I mean big Agaves six foot across, growing four or five feet above the surface of the lake, sticking out of the walls. You would think that a big lake, up in the mountains on the edge of Switzerland, would certainly be prone to frost and ice, but the planting that was up there would indicate that the water body itself seems to act as a sort of heat-sink and holds at least some warmth, enough to keep the temperatures relatively mild or at least even so that they dont fluctuate quite so wildly. If thats the case, then that may indicate why theyve got quite such a wide band of plants, (as we also have here in Cornwall). In the Westcountry here we actually have a very small temperature fluctuation, on average from 0°C to about 30°C through the year. In most places on the Continent they have a temperature shift of at least 50°C from one season to the next. It seems to be that the differentiation of temperature in Italy gives you much harder extremes of dry cold winters and hot dry summers: whereas at home we have, basically, soggy winters and soggy summers. It can make a dramatic difference: certainly up in Lago Maggiore I got the distinct impression that that was the big difference up there  there was a much smaller temperature fluctuation to that which we and the southern part of Italy experience. 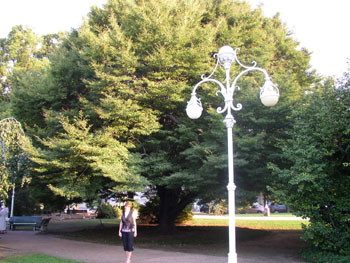 The largest specimen of Fagus sylvatica 'Meredes' I have ever seen.
Sorry, but I was put in the picture for scale...

I, for one, hadnt realised that halfway up Laga Maggiore you leave Italy and cross into Switzerland. Those Ive described were the main plantings, but there were a couple of trees which my colleague and I didnt know: we were having a competition to see what we couldnt identify.They had the most fantastic Cedars  they really did look magnificent. Not only that, the Monkey Puzzles (which I have to say are my most loathed tree in the world  I really do not do Monkey Puzzles at all!) were flowering out there as well and setting cones. If youve never seen the flower of a Monkey Puzzle, its like a small red football. They have male and female flowers. One part of the plant hangs down and the other is a red football, which is the female part. And theyre really quite striking  about the only thing about a Monkey Puzzle which actually appeals to me. Theyre very large and straight specimens over there, they obviously do very well.

Wind doesnt seem to be a major problem up there, although I suspect that in winter its an infinitely less sociable part of the world! Its a very beautiful, very scenic country. I think they have a lot of air movement, certainly up and down the mountains youre going to get a lot of thermals and that will also help to keep the air clear, clean and happy: that will make quite a big difference. So they grow sub-tropicals in Switzerland because of the warmth of the lake: apart from the fact that theres a border there you wouldnt know you were moving from Italy into Switzerland. You think of Switzerland as snow with Alpines and the Alps and all the rest of it. I was talking to a lady who comes from Switzerland and she was saying that, for a small country, it has a huge diversity of scenery. The northern lakes of Italy, which are the southern boundary of Switzerland, are only one component of it, and they do make a big difference. I think that for a lot of people theyre a very important part of the Swiss scenery. So the plant life around there, whilst it wasnt actually coping with salt per se, it was certainly coping with wind coming off the water, and I suspect with a lot of cold wind in the winter moving straight down off the mountains. But as you went up through the northern side of the lake and into Switzerland we then headed towards the San Gotthard Pass  and boy, did the scenery change! I was given the option of going through the San Gotthard tunnel or going up the Pass: Im not good on tunnels so I chose the Pass. They do hairpins like you and I do  well, there were certainly a lot of hairpins, lets put it that way. And the hairpins dont just involve a bend, they involve the bends actually hanging off the side of the hill, suspended. So, if you dont have a head for heights, I wouldnt recommend taking the San Gotthard Pass! It didnt fill me with too much enthusiasm when my colleague also said to me, Oh, its open again then. I said, What do you mean, its open again? and they said Oh, well it has been closed because of landslides. They have little roofs on bits of the road, as youre going along, and youre thinkingwhys this? and then you realise its because then the landslides sit on the roofs instead of closing the road. But its very impressive. 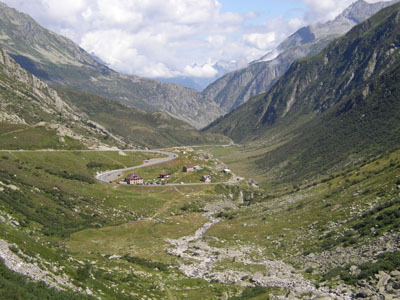 The famous San Gotthard Pass over the Swiss Alps.
We travelled from 35 degrees to 6 degrees in 30 minutes. Stunning scenery even
if the roads were a bit hairy! Beautiful alpine flowers and real cows with bells round
their necks.

You look across the mountains and you think I wonder who mows all that because it looks perfectly manicured like something out of The Hills are Alive with the Sound of Music -sort- of-thing. Obviously youre seeing them from quite a distance, but even close too the grass is very clipped, very short. The cows up there use it for pasture and they keep it very neat: you dont get long shaggy grass in the same way that you do with grassland over here if its not getting trimmed or cut at all. It was delightful actually to see cows with bells round their necks  lovely, big clanking bells  like youve read about in Heidi or something! Driving up through the passes  and bear in mind that this was the beginning of August  the passes were full of beautiful Alpines and mountain flowers which was not something Id expected to see: Id have expected those ones to be out in May and June time, but they were out a lot later. There were Mulleins up there, Salictrum, Heliotrope, Litrum (and the dreaded Pink Weed which gets everywhere). There were some really lovely drifts of flowers coming down the mountainside which looked very impressive. I would love to go back through that pass again around April or May time, I would imagine it would be absolutely spectacular. It was very weird, driving along and seeing snow less than 100ft away from you.

Coming back down the other side, towards France, the scenery changed completely again. It was as: far away from coasts as it is possible to get in Europe, smack in the middle of the Swiss-French border, thousands of miles away from the coasts (or it seemed like it), no coastal influence at all. I have to say, that if I was given the job of coping with the problems of the coast and the salt, and the sheer unadulterated boring-ness of large amounts of flat, French countryside, I know which Id go for  the coast. Yes, youve got problems with the salt but youve got infinite variety of plant life and I think its far superior. But driving through France, I have to say the countryside was pretty darn boring after that  hundreds and hundreds of acres of maize  I suspect an awful lot of it grown on subsidy. As for trees, there was a fairly basic range of stuff, so there were Sycamores, Ash, Maple, those sorts of things, nothing to get excited about, not even as exciting as British countryside really, I thought a lot of the countryside was very bland. Unfortunately, because we went straight back to Calais I didnt get to see the Brittany countryside.

It was interesting coming back over on the ferry, landing in Kent and realising just how parched the countryside is in the south-east, worse than France because in France theyve got irrigation going everywhere  massive jets of irrigation non-stop going through France. But as soon as we got back into the UK it was just devastated, so brown. The grass looked as if it hadnt been watered for months  well, it probably hadnt. The grass around the hotel wasnt grass, it was just brown, like tinder if you put a match to it. Interestingly, coming back towards home it got greener and greener as I headed west and I realised how badly off the south-east of the country is  you really do have to count your blessings down here.