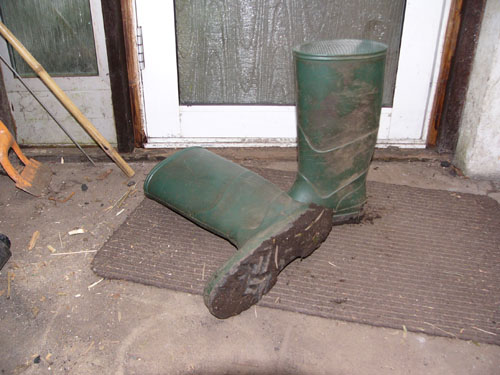 The wellie boot test is as good as any!

What to do in a wet spring

Tracy Wilson has a few suggestions to ease the frustration

As many of you in the UK have probably noticed, weve had quite a bit of rain recently! I was talking to a groundsman from the local golf club today who informed me that he keeps records of the weather. Weve had nine inches of rain in the last three weeks  not as much as you can get in some months but its clearly quite enough. In fact weve only had one day in the last three weeks when it hasnt rained, which is enough for most of us to start feeling pretty down and depressed. Whilst its been extremely mild and the gardens are full of all the signs of spring  daffodils everywhere, the Camellias are all looking absolutely gorgeous  it doesnt actually help you when you really want to get out and do something in the garden. As soon as you walk on the ground youve got more mud sticking to your boots and your trousers than youve got left in the garden. If you are walking over the ground you end up compacting it and youre not doing yourself or it any favours at all. So what can you do at this time of year? How can you actually get yourself slightly ahead and relieve some of the frustration when its yet another wet Sunday afternoon and theres a limit to how much rugby you can watch (even if youre a relatively new convert, like me. And the reason I watch the rugby? Nothing to do with the score, believe me!).

So its a good time of year to go out to your local garden centre, particularly if you are a keen vegetable grower. Perhaps youre not yet but you really quite fancy getting into it: you may fancy picking your own, being able to go out and get a crop and eat something that youve grown yourself with full control over the chemicals that have gone on it. It s a good time of year to go out and actually have a look, see whats available and start some of these things off. Good centres will have seed potatoes available now and onion sets. Onion sets are a little bit difficult because really you shouldve got your ground prepared before Christmas. The sets need to be planted directly into the ground, so given the wet conditions, maybe they aren't the ideal choice. Potatoes, on the other hand, are an infinitely more forgiving family and you can have a little bit of fun. You dont have to grow them in the ground, you can grow them in tubs and a variety of other containers as a way to make yourself quite a nice crop, particularly if you go for the earlies. There are two trick ways of growing potatoesin a greenhouse to get yourself a nice early crop. One is the poor mans version and one is the slightly posher version.

Well go for the slightly grander version first. Its a form of recycling, really. Go to your local garage and ask them for three old car tyres. Try to get them matching, if you can, at least in diameter. Take them home and stack them up one above another in the greenhouse. Fill them up with compost: you can use your own compost mixed with soil or you can buy some multipurpose  it doesnt really matter what you use. Buy your seed potatoes and set them to chit. In other words, put them into trays in the greenhouse (so that they do exactly what you hate them to do when youve bought your potatoes for eating and stuck them in the cupboard. Four weeks later you fancy a baked potato and then you discover youve got four foot tendrils coming out of the door!) Put them in narrow face up and you get all these little shoots coming. As soon as theyre about half-an-inch long, plant them out into the compost. Bury them so that their little shoots are normally about three or four inches below the ground level. Water them, walk away, sit back and wait. When the little shoots have poked their noses up through  if this was in the ground you would then hoe and bank them up to bury the shoots a bit further  but what youre going to do is to dash off and get yourself another car tyre or you may have been very prudent and got yourself six at the time that you went. You stack another tyre on top and you pile a load more compost in. Then you wait for those little shoots to force themselves up through that next ring of compost  and you just repeat until youve got yourself a stack, probably about four- or four-and-a-half feet tall. Then you can let your potatoes develop. The simple bit is that you just take the rings away. You can access your potatoes extremely easily by lifting up the rings, sticking your hand in, finding some tubers and bringing them out. So you dont even have to destroy your potato plant to do it  you can have a crop and come again policy if you like, which works quite nicely.

Thats one way of doing it. Another way of doing it is to get yourself a compost bag  quite basic but quite strong. Ideally, go for one of the ones that is black on the inside rather than one of the see-through ones. Roll it down: if youre a gentleman pretend its a stocking, I suppose, and roll down the top. If youre a lady, its a compost bag and youre going to roll it down Roll it down until youve got a depth of a good twelve inches with a nice collar around it of rolled-down compost bag. Fill it up with compost  exactly the same procedure  put your chatted potatoes in there and when they shoot up through, unroll your compost bag a little bit more, pop some more compost in there and keep going until your compost bag is full. And then all you need to do is to cut some holes in the side so that you can reach in collect your potatoes that way. So its quite a nice early way of getting your potato crops underway and getting yourself some very good, early new potatoes. So those are ideas you can be getting on with and playing with. 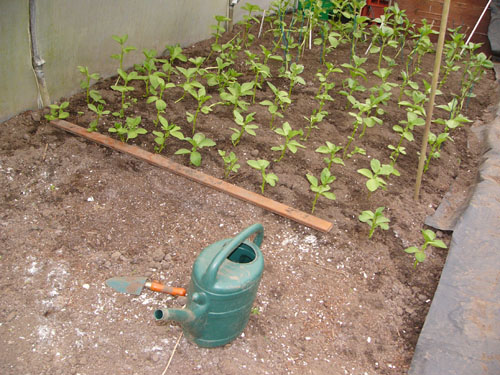 Broad Beans, snug in a polytunnel

You can also start having a look at a lot of the other vegetable seeds. You can still sow Brassicas to get spring greens, if you want to. You can start looking at the salad crops, get some early crops going in the greenhouse. Again, you can grow them very easily in pots. Some garden centres may have some of last seasons growing bags. As long as theyve been stored under cover theyd be fine with some additional liquid feed and theyre great for growing salad crops in. You can stick them on a shelf in the greenhouse and have fresh lettuces, spring onions, radishes  all sorts of things. So theyre quite fun.

Have a lookout for the Italian seeds  the Franchi range, you get them in most good centres now. Once theyve tried them, most people go back to them time and again because the flavour is far superior. You know youself, if youre lucky enough to go on holiday to the Mediterranean and you actually get to eat real plum tomatoes that have been cropped over there (not the flaccid versions that we get over here): the flavour is streets ahead. But the same thing seems to apply to all their vegetables  the calabrese, the beetroot, the carrots  they all seem to have much more intense flavours. So if you havent tried them before, theyre worth playing with. Have a look at them, you can get quite a lot of them started off now in seed trays. Get the little plants ready, and then hopefully at some point in the next six months, it WILL stop raining and youll actually be able to get out on the ground again. Then, knowing our luck, there'll have to start using a hosepipe ban again by then!

So, once youve done all those ones and youre thinking When can I actually get them out? youre going to have to watch the weather and youre going to have to watch your soil. The wellie boot test is as good as any: if you can walk over the garden and the mud doesnt cling to your boots making a pair of platform soles underneath and the soils reasonably workable, you can get out there and actually work the ground.So if youve got a sandy soil  and the chances are, living on the coast, you have  youre at an advantage to the rest of us who are at the moment are sort of underground. Having been to the local golf course and seen their tees all looking like Chinese paddyfields and the green keeper tearing his hair out. But if youve got a sloping garden, sandy well-drained soil, the chances are that even with this level of rainfall you may be able to get out and work the garden, especially when youve got a windy day like today which will dry the soil out very quickly. Get out there, even if youre not sowing your vegetables outside or even planting them  go and start turning the garden over, or get the mulch on top of the ground, get the compost out of the compost heap and get it on to the ground because the worms will already be active. Go out and have a look at the plants. Youll find theres an awful lot of activity out there, theres a lot of young growth coming. Even if we get a very cold snap next month, I think its going to be a very early season this year, so it pays to get ahead of the game a little bit, as far as you can.