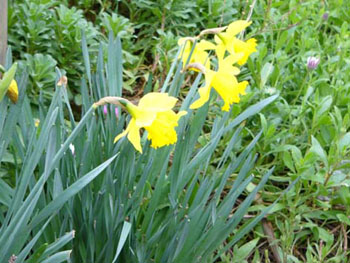 Daffodils - it's time to plant them already!

At the end of August, most of us are still recovering from the unaccustomed heat that we have endured this summer. Despite the torrential downpours of the last couple of weeks there seems to have been more Mediterranean summer weather than English than we can ever remember. It seems a rather odd time to be contemplating the pleasures of next spring, but if you really want to make the most of next springs bounty, then thats what you should be doing at this time of year. Whether youre thinking of the purely visual delights that your garden has to offer, or whether youre thinking on slightly more edible lines, both should be given serious consideration at this time of year.

Starting with the ornamentals, one of the most obvious things you should be looking at, at this time of year, is the huge and devastatingly gorgeous selection of bulbs that have all suddenly appeared in all the shops. The nice thing is that with virtually all bulbs it doesn’t really matter whether you live on the coast or inland. There is something to suit everybody. The main thing you need to remember is, the windier the location, the shorter the bulb you should go for. So, please, don’t anticipate two-foot Daffodils if you happen to be parked on top of the cliff at Crackington Haven… not unless you want very horizontal Daffodils. Go for the shorter ones, like ‘Tête-á-Tête’ or ‘Baby Moon’, which are going to be far better varieties in a very windy situation. The same thing applies to leaf width: on the whole (and this is only a rule of thumb), the taller the Daffodil, the bigger the leaf and the more damage it will suffer in gales, including salt damage, and the less well-suited it will be to that situation. But if you think maybe about the Lizard and certainly on the Isles of Scilly, you’ll find bulb fields all over the place – and they’re damned near washed with salt. So it’s not as if Daffodils won’t cope with our coastal conditions and there’s no reason at all to avoid having them – they do extremely well. Yes, they’re transient, but they’re gorgeous. Who doesn’t know the line ‘A host of golden Daffodils’? It really does cheer you up on a pretty grim and miserable spring day (because, let’s be fair, not all spring days are lovely!) to see the Daffodils all out in flower. 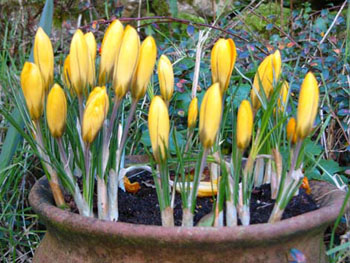 But don’t just look at the Daffodils. There’s a huge array of spring bulbs out there to choose from. Much maligned, there is the humble Tulip, which I think has been somewhat overlooked. I’ve literally just this weekend been potting up some Tulip bulbs into pots. Now, because I’ve just moved house, I’ve got a little patio deck area which I’m rapidly filling up with pots, including quite a lot of pots which are going to give me colour in the spring. At the moment, of course, they just look like empty pots of compost. But I’ve been planting up some nice double Tulips, dwarf red Tulips which I’ve been using to underplant a beautiful bronze Carex buchanii. You can consider some very nice combinations with displays that are going to give you some colour in the winter. For example, if you’ve got a patio area or a deck area where your summer plants are starting to look the merest bit tired by now: an awful lot of hanging baskets are going to be over very quickly this year unless you’re absolutely religious with your watering and feeding. If you can contemplate planting up winter baskets and tubs now: it doesn’t mean that they have to be what a lot of people would consider boring: some of the evergreen grasses look fantastic, things like Euonymus, or even bigger tubs with Holly and Conifers in. You can underplant all these with bulbs so that you’ve got that lovely sort of seasonality introduced into what a lot of people would consider to be ‘staid’ planters otherwise. Winter tubs and baskets don’t have that massive influx growth and then that great overwhelming lushness of flowers that you associate with your summer tubs and baskets: they have much more subtle colour schemes. But, you know, in most coastal areas there are very few days in the year when you can’t sit out of doors. OK, you may have to put on an extra fleece!

There’s nothing worse than wasting your sitting area because you’ve got rid of all your tubs and pots and baskets, emptied them all out and put them away until next summer. Put some winter colour out there. As I've said, the evergreen grasses are ideal. I love having things like Hollies, because again you can weave your Christmas lights through them. Aaaargh! I’ve just mentioned the C-word! But you’ve got to think about these things: it may seem horribly early to do so, but Christmas is a-coming and I’m sure that within a matter of weeks people are going to be saying how many shopping days there are left… I’m not even going to go there… But don’t only think about your bulbs for the garden, do look at them for tubs as well because they make brilliant tub plants. The nice thing is, if you have them in tubs you can enjoy them, have them by your front or your back door, wherever, and then when they’re finished you can just deadhead them and move them out of the way. It’s not as if you’ve got them in the garden and you’re thinking ‘Oh heck, I’ve got to leave them, I’ve got to wait until they’ve died down before I can tidy them up’, you can just move the pot out of the way. Problem solved, a lot easier to deal with. 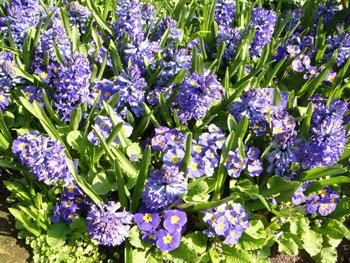 All blue: Hyacinths with primulas

One thing on the bulbs: you will see the Cyclamen offered for sale in the spring and in the autumn. Please, unless they’re the indoor Cyclamen for Christmas, don’t buy dry bulbs. Only buy the plant in flower. Now, if you like the hardy autumn Cyclamen that you put out in the garden, you’ll find them in your garden centres now, flower buds coming up and opening. They’re lovely plants and should have loads of shoots all coming up around the edge of the pot, which seems weird, but that’s because that’s how they grow. In the centre of the put there’ll be the corm, and the shoots with all the buds on come around from underneath it. It looks a very strange plant but buy them in growth, you’ll have a much better success rate and you can also be fairly well guaranteed that they are seed-raised stock and not corms that have been collected illegally from the wild – that does still go on. No matter how innocent the bulb companies make themselves out to be, it still happens and the natural resources of these beautiful Cyclamen are dwindling massively which is a travesty. So buy these ones in flower. You can also buy the Autumn Crocus. You buy them at this time of year, plant them and they will very quickly start to flower – no foliage, but they flower this autumn. They need to go in very early, in fact you’re probably getting a little bit late for them, but you may get some bargains because they’ll be reduced fairly soon. I wouldn’t say they’re the greatest success in the world, they’re over very quickly and aren’t always reliable for re-appearing next year unless you can offer them really ideal conditions, which few people can. So I wouldn’t get too carried away.

Certainly there are some fabulous varieties of Tulips around. The problem with Tulips, however, is that the big, traditional ones that grow up to around two feet (60cm) generally have been cold treated to make sure that they flower properly. This means that in successive years you don’t always get good flowers. But the specie ones, which are much better suited to windswept and coastal areas, aren’t cold treated; they’re shorter so they’re much better from the point of view of the wind. They generally flower more reliably, particularly in a coastal area because they haven’t got the frosts and don’t generally have damp, wet soil conditions because it’s generally freer draining. Some of them are almost groundcover with a flower spike of maybe a couple of inches. Some of these ones are absolute crackers, like ‘Little Red Riding Hood’ – gorgeous striped foliage and grows about six inches tall. So there are some real sweeties to think about for the garden or, again, in tubs. 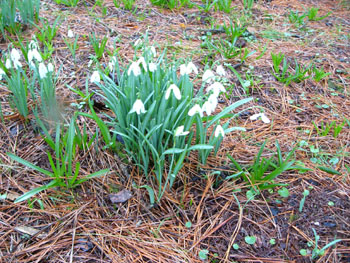 Whilst strictly speaking not bulbs but theyre sort of bulbs within the vegetable department  there are the potatoes. Think about sowing potatoes now, not for the spring, if you get them in in the next two weeks, you could have new potatoes for Christmas Day, and that has got to be something rather nice. You dont have to plant them outside, you can cheat by doing them in the greenhouse or even in a conservatory. Use the old-fashioned bag method. Get yourself a compost sack and roll it down so that you end up with a plastic bag pot 12 inches (30cm) deep. Fill it with compost and put your seed potatoes in there. In an average compost bag you probably want about three potatoes, preferably chitted. Put them in there and then when the foliage grows up, you then bank them up, the same as you would in the garden. In this case youre going to fill the bag up with some more compost, so you raise the soil level up to the foliage. The stems will carry on growing, and when theyre up another 6 or 8 inches, put in some more compost. You keep on going like this until youve filled up your compost bag. You then let your potatoes carry on growing. Come Christmas you just have to slit the bag at the base, go furtling in there and the chances are youre going to find yourself some very nice new potatoes there for Christmas Day.