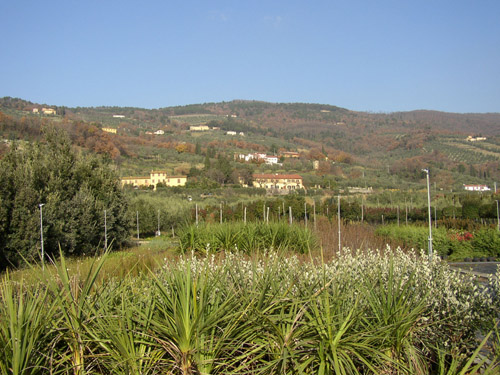 Cordylines at an Italian nursery, with view of hillside

Coastal gardening to most people seems to be hugely restrictive. There is an automatic assumption that you can only grow from a limited palette of plants. Im not going to say that thats untrue, but certainly people believe that theres a greater restriction than is strictly true. In fact next month Im going up, somewhat scarily, to talk to the RHS symposium on Creating a Mediterranean Effect in Your Garden, with Roy Lancaster. Im talking about using shrubs to create a Mediterranean effect.

If you ask anybody, what sort of plant would they would think about asMediterranean, they would automatically come up with things like Olives, Rosemary, Thyme, maybe Bay  the traditional herbs, I suppose. They have this vision of them hanging off a Sicilian cliff. If you think about the word Sicily, an automatic assumption with that would be Citrus plants: Im looking at the picture of a Citrus that we saw in Italy. Its fantastic how well these plants will adapt. Is it a shrub, is it a tree?  it doesnt really matter, grow it as it suits you, they do extremely well. Citrus plants really enjoy that sort of a climate because theyve got that warm, dry situation in which to do really well. Ttheyve also got the cold, dry conditions in the winter, which help them  they need to have that cold period. So dont think that automatically, because you grow on the coast, the plants have got to thrive all the year round. They have a period when they do extremely well and then they have a period of time when they very often go dormant, or slow down  its part of what they need to do. So, don't expect a plant to look good 365 days of the year: it cant and it wont. The sooner people accept that, the better you can get your garden looking, because you choose plants that look good for a particular period of time, and you spread that period through the year so youve always got something thats looking good. That will give you the best of both worlds.

Citrus is one very good example, but again, you could look at something like Gardenias. Now Gardenias are traditionally thought of as a conservatory or house plant, but if youre in a coastal situation, there's no reason at all why you cant grow those ones in a sheltered position outside and they look really good. Of course, when theyre flowering, why not bring them indoors and enjoy the perfume that way?. Another really gorgeous plant which you can get away with in a coastal situation is Strelitzia, the Bird of Paradise Feather. Theyve got a leaf a bit like a well-behaved Banana, and then there's this quite unbelievable-looking flower  they look plastic, quite unreal. In a coastal situation, particularly, they will do really, really well and theres no reason at all why you cant enjoy them in a coastal garden. Theyll enjoy the situation, theyll take the coastal conditions. They look glamorous, exotic. Mediterranean doesnt always mean muted, dry, soft colours. Think about Bougainvillea  a very lush, enjoyable, very flamboyant flower. Diplodena, Mandevillas, all that sort of thing look extremely exotic; but its a thin line between Mediterranean plants and moving on to places like Madeira and the Canaries. 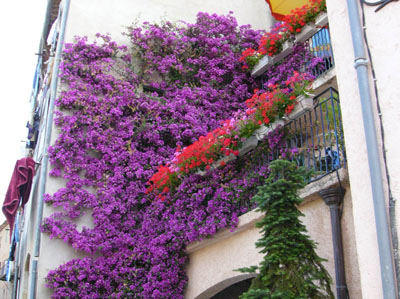 So when does it stop being Mediterranean and when does it start moving into the exotic? Theres a very blurred, grey line there for me. Im not dreadfully purist about this, I like to think that you can create a palette quite easily from what you want yourself. You create an image in your mind, and then you can start to choose some more unusual plants to put in it. So is there any reason why you cant have a Rose in with an unusual Mediterranean style of garden? It would actually look extremely good. It doesnt have to be something that you would think necessarily fit with a Mediterranean style of coastal gardening, but it can actually look superb when it can tie a whole border together, and adds your own personal take on this. Dont think that youve got to automatically follow the fashions: create your own fashion (anyone looking at my dress sense would realise that Im not exactly a great follower of other people's fashion!).

There are other more unusual things which you might consider using. You might have a ' mainstay' plant but you might consider a different way of using it. So, for arguments sake you might look at Cupressus arizonica (the Blue Fir) and think, well, this is actually a rather boring conifer, I dont want to play that game  but what about trimming it into a standard , growing it as a lollipop so that you could have it as a formal plant on a patio in a coastal area. It will then take the salt wind and make a very nice, formal tree and still do extremely well. Its a tough conifer thats still going to give you a lot of benefit. You can do the same with Bay,or you can have clipped spirals of golden Cupressus Goldcrest or something of that nature. Create a very different effect and go away from the mainstream, boring, 'blobby-type' plants that people automatically have. In a coastal situation you very often clip them, make them into hedges, turning them into something like that. Think slightly differently, think outside your average shape and see how you can go with a bit of topiary. Holly clips beautifully and is a very tough coastal shrub as most people know. But you can have a little bit of fun. Start making a butterfly!. I saw a very impressive elephant when I was out in Italy at a topiary nursery  a perfect little baby elephant. Make your garden fun: it doesnt always have to be serious and boring. You can have a wonderful, organic-looking hedge which can be quite fantastic. When I say organic I dont mean that its grown organically, I mean tha it looks like an amorphous animal thats just growing out of the hedge. Some people clip them deliberately to look like waves or patterns going down the sides of the hedge. They can look really quite fascinating. So its not necessarily the actual plants that you choose yourself, maybe its how you interpret them and how you choose to use them in the garden that can lend inviduality. 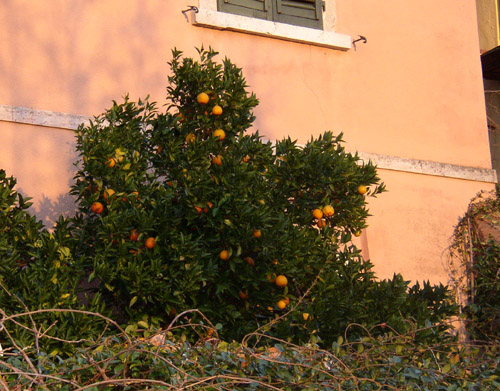 Quercus suber is the Cork Bark Oak and is something that you do see a lot of in Italy: theyre wonderful, wonderful trees with big beautiful bark which you can squeeze so that it 'gives'. It is of course the tree from which cork was traditionally made and still is, although not as often as it used to be. They are mostly grown around the Mediterranean because they have to have the heat for regeneration of the bark. This is stripped as a crop if the tree is for cork production. Its fascinating when you see what they are actually used for. It's a beautiful tree, with smaller leaves than the Quercus ilex, and a wonderful corrugated bark  a very tactile plant. But you see these massive great trees that have been heaved out of the ground, you think Gosh, I bet the poor soul wishes it could just put its feet down and carry on growing. Then its put into one of their massive pots, ready for sale. But ordinary, deciduous Oaks like the Turkey Oak, Quercus robur, Quercus patraea  youll find all of those ones available.

Quercus robur "Fastigiata"  the Fastigiate English Oak  is still available as lovely big specimens there. But within the large, specimen trees that you get (and you do get large!), you can buy trees seven, eight, nine metres tall, in a pot ready for instant planting, whether its a common-or-garden Ash or something rather more exotic like a Liquidamber. This year Ive bought a beautiful, five-metre tall Liriodendron tulipifera (Tulip Tree). Some of the ones in the row were showing where theyd obviously flowered last year: now whether theyre standard or not, Im not sure, because I picked on a gorgeous straight stem, with a lovely leader still on it: Im just hoping and praying it gets back to our nursery intact, because if you could see how they pack the lorries thats another ballgame altogether! 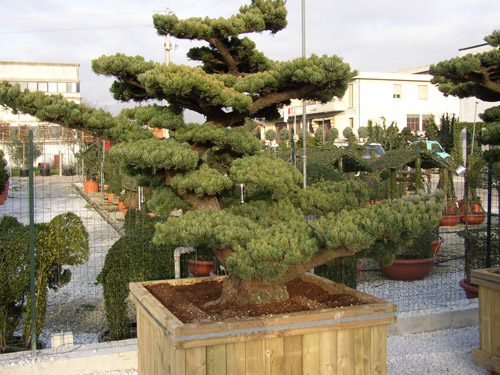 
You can buy huge trees in the UK, but theyre a lot dearer because they cant grow them as quickly. Thats the depressing news. I bought one of the trees Ive got and its absolutely divine, I cant wait to get it back to the nursery next week: its a Betula utilis "Jacquemontii", or Himalayan White Birch. It has a beautiful white, ghostly silhouette, five to six metres tall and multi-stemmed.The rootball is probably nearly a metre across. Lifting it is not something which is going to be looked upon with joy by my staff when it arrives next week. Its absolutely divine, an instant tree for somebody. I can sell that one over here, in the pot, for less than £350. If I bought that over here, I would be paying nearly that for it, wholesale. Thats the difference. The UK industry is geared up with the same machinery for lifting and wire for netting it. The main reason is the speed at which the Italian growers can get it up to size, but also the horticultural industry in Italy is subsidised  although not to the same extent that it is in Holland. The UK horticulture industry has no subsidy whatsoever, it has to stand up on its own two feet, in fact it has quite a lot of levies on it which other countries dont put on board. So its an expensive industry. We do try to buy British when we can but there are occasions when we feel the need to pass on the benefit of savings to our customers

And hell, its a dirty job but someones got to go out to Italy to find the plants! The sacrifices we make ;-))