Growing in the Air

If you divide plants for the garden into almost bodily parts, you can think of trees as being the backbone, shrubs as being the rest of the skeleton; perennials provide the flesh and then your annuals generally giving you the make-up  theyre the bit that gives you the instant colour, the sex appeal, the clothes, if you like. So for most people with a coastal garden, the temptation is to go tripping off to your favourite nursery garden centre, and you see things that are already starting to flower and you think Right, thatd be great, theyll look nice, Ill take some of those. You wil be sadly, sadly disappointed when the first gale comes along and they literally get blackened. It can be really very depressing. But there is a good range of annuals which will tolerate quite severe coastal exposure and in fact do quite well. Its really a case of looking at the ones that wont enjoy those sorts of conditions  which plants to avoid  and then how to look after the rest so that youre going to get the best out of them within the year by increasing or extending the flowering period and make life easy for yourself. This is particularly a concern for hanging baskets which, even given the most sheltered of positions, are vulnerable. If you have them hanging off a house overlooking the north Cornwall coast then suddenly, oh boy, have you got a whole new ballgame to play! So you do have to choose carefully what youre going to have. 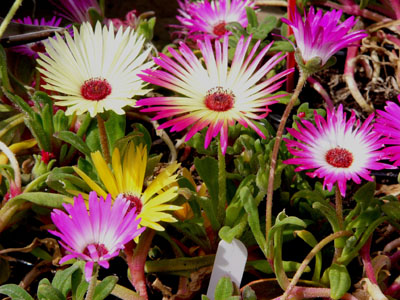 Iif you look first of all at the plants that are actually used for, for arguments sake, hanging baskets, from what is a pretty wide choice of annuals which are available now, it isnt too late to sow some seed  Ive always said, and Ill continue to say  do not race to be the first person on the street to have your hanging basket up, because youll also be the first person to take it down! So, if you do start them off and get your display a little bit later, then with a little bit of luck your display will be looking at its best when the season is at its calmest. To be absolutely fair, whilst we had a really nice April, so far May seems to be playing some pretty nasty tricks on us: the first week was beautiful and the second week has been a fair dinkum as far as bad weather is concerned, and if youd had all your annuals out now, theyd have taken a fair smacking. So if I was looking at the annuals specifically, the one thing Id want to avoid most definitely would be things like Lobelia and Alyssum because they will literally get blackened and will not enjoy life with you at all. The ones which are best to look at are things like Petunias, but go for the singles, not the doubles, and the Fibrous-Rooted Begonias which are the ones with the lovely shiny, rounded leaves and small flowers. They come in a lovely array of colours now: they used basically to be pink flowers and green leaves. Now you can get rich, mahogany-red foliage and you can have flowers in pink, red or white with either the green or purple foliage variant. Theyre excellent, will take any amount of weather. Cineraria, which is really a foliage plant, theres one called Silver Dust it has very lovely grey foliage which as with all these grey-leaved plants is very good for coastal areas and makes a nice foil for other things. You should also have a look at Mesembryanthemums, which are just an annual version of the Lampranthus which so many people on the coast have got hanging off their walls in lovely great sheets of Hottentot Fig  its the same family but its the annual version. They of course give you the wonderfully bright, jewel-like colours which do so well. Another group which Im really fond of is the Verbenas. Again, they generally come in bright colours although there are some soft pastel shades. Im a bit picky, I quite like my baskets to be sort of colour-coordinated, not necessarily all of one colour but as a blend of complementary colours. Sometimes a real hotch-potch of colours can look really pretty, particularly in an olde-worlde cottage garden: otherwise I quite like mine to be a little bit coordinated at least, as far as possible. So you can, with Verbena, pick out a really nice range of colours of whatever blend suits you. Theyre mostly in shades of pinks, purples and whites, you dont get oranges and yellows in those ones. If you prefer the warmer colours, of course the Marigolds are very good to look at. I would avoid the African Marigolds  theyre fine for tubs or for bedding, but theyre big, they have big flowers on tall plants. The Tagetes, which are very fine-leaved with very small single flowers  those ones probably wouldnt be my first choice because they tend to make such a big bush that they tend to get blown about a little bit. The dwarf French Marigolds are the ones that I would go for, for my first choice in the Marigold family. Theyre short, theyre robust, their flowers arent too big and heavy, very free-flowering, and they will do very well. Another flower which I like but I wouldnt want to put in a basket that was going to be in the full smack of the wind on the coast, but if it was round at the back of the house, is Nemesia: its a very charming annual, the flowers are almost like little Slipper Orchids, in a lovely range of jewel colours. Those ones are particularly pretty. 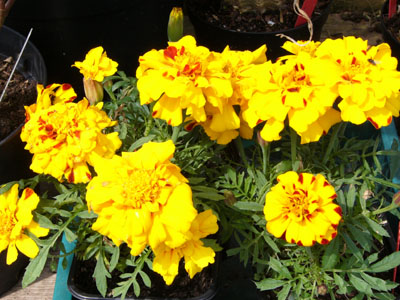 When it comes to trailing plants, I know people like to have quite long, trailing effect out of the basket. Ivy is always a popular to go for. Yes, it is slowish growing, but bear in mind that you can recycle it! You could have a winter hanging basket or you could save it for the following year. Theres a lovely plant thats relatively new called Dichondra Silver Falls. It has a leaf which is sort of like a round heart-shaped leaf and it will hang rather like Nepeta  its almost like dreadlocks for hanging baskets, really! Its gorgeous, with a lovely softly hairy leaf with a really silver sheen to it, extremely pretty. There is a plain, green-leafed form as well but the silver one is particularly attractive. And of course, there is Nepeta  and Im not talking here about the Catnip version of Nepeta  I mean the pretty, variegated form, its actually called Nepeta glechoma and again, long dreadlocks hang down the basket, looking very effective. Be careful, if you do use those ones in the basket, to balance them up, otherwise your basket will look like a rather fat pussycat hanging in the air with a big long tail hanging off one end  make sure you hang them on each side, with two or three in the basket, so you get a very good effect with those ones.

So, thats the main annuals. Now we go on to what I think of as the body plants, things like Fuchsias and Geraniums are excellent too for that, and the very well-known coastal plants, ivy-leaved Geraniums – , the ordinary upright ones. Fuchsias are brilliant. There is also a big range of basket plants which you can get now, grown as tender perennials  huge range, things like, again, Verbenas that come from cuttings. These ones usually come in individual pots so that you really can colour-coordinate your basket. Theyre a little bit dearer, but theyre perennials so if youve got green fingers you can take your own cuttings and keep them going from year to year without too much problem.

I suppose my final hint for anybody doing a hanging basket, but most especially in a dry, coastal area, would be to make sure you incorporate water-retaining crystals in the compost: theyre sold under a couple of trade names, Swell Gel is probably the most popular one, but youll also find 'Hanging Basket Water Gel.' What you do is mix it with compost, you plant your basket up, then you give your basket a really good drink and leave it for an hour and then come back and give it another really good drink, by which time the crystals are charged up and then you give the basket another good soak. Don’t, please don’t, be tempted to put more in your basket than it says on the packet! You may think you’re actually doing yourself a favour by putting more in, but I know somebody who had done their basket and then decided, when they were mixing their compost and mixing the Swel Gel crystals in, that it was such a good idea to use twice as much as it said on the packet. This they duly did and then theyy watered it according to the instructions and walked away. When they came back an hour later it looked as if a mole had erupted in their hanging basket! Of course as the crystals had swollen up to ten times their size, there wasnt room for everything in the basket and something had to give... everything had got pushed out of the pot. It was a very good lesson in you can have too much of a good thing. So dont use too much.