Tracy Wilson looks at the future for gardeners 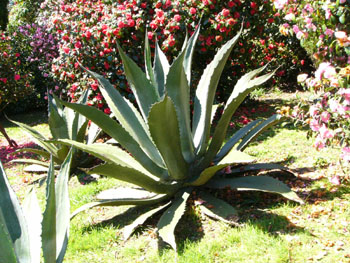 On the way in? Agave

Global warming is (unless you happen to be an ostrich or President Bush) a very serious and very real issue and one which you cannot afford to ignore unless you have a very cavalier attitude to this planet. It is something which it is beholden to all of us to take not only an active interest in but also an active and participating role in trying to ensure that there is a planet for future generations to live on, even if there isnt an awful lot we can do to improve things for our current generation. From the point of view of the plants and gardening, however, there are quite a lot of aspects to global warming which you need to consider, ranging from how you garden and what you garden with, to how you actually consider and treat your garden. Looking at it first from one point of view: how are you actually going to do your gardening, shall we say for the next 40 years? Admittedly, in 40 years time the chances are that Im going to be strolling round with my zimmer frame!  but, hopefully, I will have had enough forethought to put in place ideas that will mean that (a) my life is easier and (b) that the plants that I incorporate in my garden are going to do the job that Ive asked them to do, without having too much stress applied to them.

From the doom, gloom and despondency point of view, the bad news is that if everyone in northern Europe stopped driving their cars tomorrow, it wouldnt make any difference whatsoever to whats going to happen to this planet in the next 20 years in terms of temperature rise, because the damage has already been done. Carbon emissions over the last 25 years have done that damage for us. It means that in the next 40 to 50 years the average ambient temperature in this country will rise by approximately five degrees  it doesnt sound like a lot, but five degrees difference will mean that autumns will arrive much later and springs will actually be the season that is least affected. It will mean that plants will start into growth earlier but will probably still get clobbered by late frosts. There is also some talk that the Gulf Stream could shift: if that happens, get your thermals on because youre going to plummet into another ice age in the UK. But if the Gulf Stream doesnt shift, scientists really are guessing when they try to tell us what will happen (oceanography is still a very unknown subject with a huge amount yet to be discovered), but we do know that temperatures will rise five degrees. Beech trees will start to die out in the south of the country. Well be growing Walnuts and Sweet Chestnuts which will be fruiting successfully in the south as a matter of course. Ordinary, 'roughty-toughty' shrubs, things like Hydrangeas, will really start to struggle because well be having prolonged summer and autumn droughts and they just wont be able to survive  juicy plants like that need a lot of moisture.

The plants that are going to do well are those that can adapt to arid conditions with low levels of moisture. So were going to be looking at a lot of the succulents: plants like Aoniums, Agaves, Echeverias, Palm trees  plants that are considered borderline hardy by a lot of people. If youve gardened on the coast for any length of time youll already know you can get away with it. But these are going to become much more mainstream. Well be looking at using things like Cannas, which are currently considered half-hardy. Well be using the Kangaroo Paws, the Watsonias. A lot of plants that you would see growing on Tresco (in the Isles of Scilly), but wouldnt consider growing on the mainland, are going to become fairly mainstream subjects. I suppose that from one point of view, yes theres a serious message out there in that global warming will be happening and were going to have to change what we do. But from a positive point of view: its going to happen, theres nowt we can do about it, so we might just as well get on and enjoy it whilst hopefully trying to put some reparation into place to ensure that nothing gets any worse. Let us at least enjoy it within the garden and say, OK, I can now grow this, maybe I cant grow those any more. Does that really matter, the ringing of changes? So long as we allow our gardens to adapt to make the most of the climatic conditions, theres nothing actually wrong with what were doing. All were doing is increasing the diversity of plants that we can grow in this country. Some plants will be moving north and it will mean that people up in the north of the country will suddenly find that theyre able to grow things that they were unable to touch before. In the south of the country and in a lot of the coastal gardens, suddenly its going to be like moving to Madeira: were going to find things are very, very different and were going to be growing a whole new range of plants that we didnt even consider before.

But while the palette of plants will change, I think its important that our methods of gardening change along side. There are obvious things that were going to have to do. For example, were going to have to look at conserving water, saving and recycling water much more. Were going to have to stop being so squeamish about recycling grey water. There are those who say,  I dont want to drain that out, there might be this-that-or-the other in it. I can remember droughts in 1976 when my parents stored all their bathwater, and yes it was grey and got a bit smelly but it kept the plants alive, and at the end of the day, that was all that mattered! Unless you can find spaces in your garden where you can catch the rainwater off the roof, then you're going to need a means of recycling your grey water. I dont mean storing it, because believe me, stored bathwater is rank, it doesnt matter how clean you may be, your bathwater wont be – and I do recommend that you let it go cold before you put it on the plants! 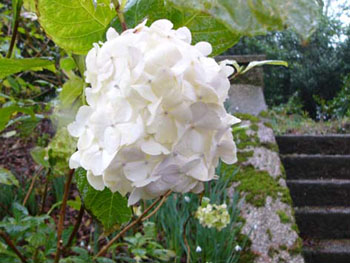 On the way out? Hydrangea

Some companies will be coming up with some very canny ideas: youll be able to drain your bath down into a small tank to let it go cold, and a little pump will then allow you to pump it out into the garden on to the plants so that it can do good where it should be, on your young plants. More and more, I can imagine that new houses will be built with underground storage tanks for catching rainwater so that you can store water from the times when we get plenty in the winter, ready for the summer when we need to use it. Its going to become the norm. Gardens and houses that dont have those facilities are going to be seen as archaic and very un-environmentally friendly. So if you do have the opportunity to build that capacity into your garden, it doesnt really matter whether its tanks on downpipes running round the edge of your house, or whether it is some structure underneath your garden that can take hundreds of thousands of gallons. As long as youre doing something to conserve the resources that weve got and doing something to make your gardening life easier, then its got to help. Those of you living in the south-east this summer will know the value of being able to access your own water: youve had the drought restrictions youd have killed for the amount of water that we have just been able to carry on using here in the southwest: we tend to take it for granted. I can remember droughts, and there are plenty of other people who can do the same. So we need to make sure that we are giving the garden the best care we can.