John Eddy works at Trevena cross nurseries at Breage. It was here that he first came across the Restios and now grows around 20 varieties in his own garden. He has plans to plant a large bed of these plants to trial them on a grander scale. He is also interested in other southern hemisphere plants especially the tree ferns.

What is a Restio?

The Restios are still very new to many people in the UK, although this is changing gradually with some varieties such as Chondropetalum tectorum, Rhodocoma capensis and Elegia capensis becoming more readily available. They belong to the family of Restionaceae and are often known as Restioids. These plants are reed-like grasses and can vary from plants a few centimetres tall to the big giants like Rhodocoma gigantea and Cannamois virgata. More on the varieties later.

There are believed to be around 30 Genera and 320-400 species of this diverse family. All the varieties of which I am aware are found in the Southern Hemisphere, with one - Leptocarpus similis - coming from New Zealand, and a couple coming from Australia - Baloskion tetraphyllum is the most common one. The vast majority of the Restios though come from South Africa. Anyone who has been to South Africa on holiday and travelled to the Cape Floral Kingdom area will have noticed that most of the grasses are reed-like: These are the Restios. The world has been split into six separate floral Kingdoms. One is the whole of Australia, another is most of the Northern Hemisphere. South Africa contains one whole Floral Kingdom: that of the Cape Flora Kingdom. The main vegetation of this area consists of the Restios. The soils of this area are very poor and the early Dutch settlers found that most of the land was too poor to grow good trees. In fact, most of the vegetation consisted of fine leaved, small bushes, so they christened the area the Fynbos - meaning "fine bush". It is probably due to the fact that the soils were so poor that the area has not been over grazed and therefore so much of this huge diversification of plant life still remains.

Some other facts that apply to this fascinating area are:
Of nearly 8000 species of plants found in the Fynbos, nearly 5000 species are endemic - in other words they are not found anywhere else in the world.
There are around 600 species of Ericas (heathers) in the Fynbos. In the rest of the world there are only 26 and Scotland has only four!
The Fynbos has a higher concentration of plant species than the South American rainforests.

This group of Restios had varied uses with the early settlers. Many of them used Elegia capensis for brooms, and Chondropetalum tectorum and Thamnochortus insignis for thatching their houses. This last variety is still widely used and grown commercially. There is also a very strong market for the use of the stems in floristry, with the stems now being seen in many bouquets.

Many varieties of Restio are adaptable to exposed conditions, making many of them suitable for growing in Cornwall. The plants carry male and female flowers on different plants (dioecious) and are wind pollinated. The plants can vary in form with male and female plants being very different - although it is not always easy to tell them apart as younger plants. One of the exceptions is Chondropetalum tectorum - the female plants are much more upright and graceful than the male form! Unlike most grasses that gardeners are familiar with, these will not self seed around the garden and become a nuisance - that is unless your garden is prone to bush fires as the smoke during the fires breaks the seed dormancy! One or two varieties actually have their dormancy broken by being carried under ground by ants. It is believed that the ants secrete a substance - (possibly formic acid) on to the seeds and this is supposed to start germination. Such varieties include Cannamois virgata and they can be very difficult to germinate. Growing these in the garden is very rewarding but there are a few points to bear in mind.

Many of these plants on the garden centre will be root bound. From a nursery point of view it is very difficult as they fill their pots with roots very quickly. This needs to be borne in mind when planting and provisions made to keep the root ball moist at all times for the first season after planting. It is better to water once or twice a week really well rather than a little every night. These plants have two main growing periods - the spring and autumn.

The general belief is that these Restios need an acid soil to grow in. In my own garden most of them seem to be very happy in neutral soils. The main consideration to bear in mind is that they do not like very rich soils and they really do need an open sunny site. Young plants can look rather insignificant but once planted out and established then they transform into amazing plants worthy of any garden. If space allows then planting in blocks can create a truly tremendous effect. The hardiness of these plants is still something that needs more research but most of the varieties seem to be hardy in most areas of Cornwall.

Varieties to consider are numerous but, for a first foray into the growing of these plants, consider the following:
Rhodocoma capensis. Probably one of the hardiest and most salt wind tolerant plants. This can reach about 2m tall and is very graceful.
Calopsis paniculata. Very upright and similar to a small bamboo. Also seems to be very hardy and the foliage is great in flower arrangements.
Rhodocoma gigantea. A "biggy" that can reach up to 3m in the right conditions. Lovely feathery foliage. The growth may be burnt back in hard frosts but normally comes again from the base.
Elegia capensis. This is the plant famous for its use for making brooms. Lovely bracts are produced on the stems of this plant that are then complemented by whorls of new foliage. Very attractive. Probably not the best one for high lime content soil.
Cannamois virgata. If you have the space and can get hold of this plant then do so. It is tremendous with new stems exploding out of the ground early in the year. This is the one that most resembles a bamboo. Relatively easy to reach 3m. Not a plant for the faint hearted but neither is this going to take over the garden like some bamboos.
Chondropetalum tectorum. As mentioned earlier this is one that can be variable but is great where space is a little more limited. Very nice straight stems. Good simple plant and ideal if you want to grow your own thatching material.
Restio quadratus. Square stems make this variety very unusual.
Baloskion tetraphyllum. The only Australian one you are likely to see - very graceful and a lovely shade of green.
There are lots of other varieties but these above are probably the best to start with.

Restios mix well with many garden plants but some simple ideas include trying to recreate some of their natural habitat. The ultimate for large gardens would be to plant them in drifts with large rocks or boulders and interspersed with Agapanthus, Gazanias and other flowering plants such as the Proteas. In the smaller gardens then they can be used as specimen plants and complemented with Osteospermums, Ericas and some of the Leucadendron family such as Leucadendron Safari Sunset, creating a wonderful effect.

Finally, the most important piece of advice to ensure success with these plants is make sure to keep the rootball moist at all times until the plants are established. 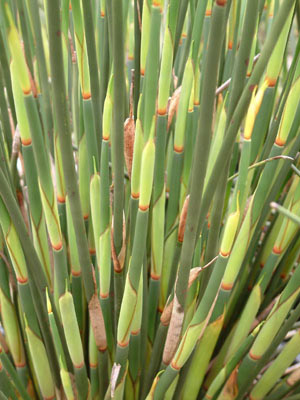 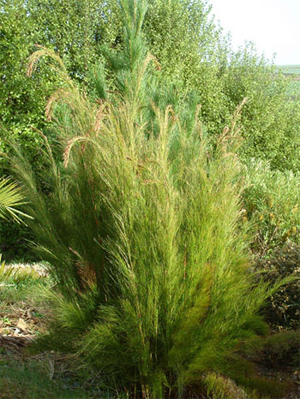 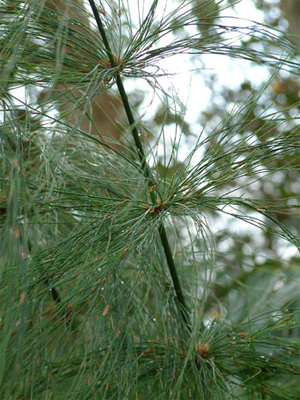 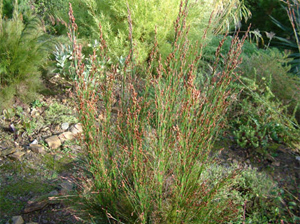 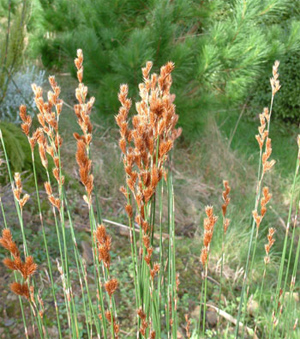