Phormium seeds were first brought back by Sir Joseph Banks but these didn’t germinate. It was successfully raised at Kew in 1789.

Best described as an ‘architectural’ evergreen, it grows to 3m (10ft) with 1-2m (3-6ft) spread. Most of you will be familiar with its long and leathery, sword-like leaves. During the summer the mature ones produce short, upright, flower stems with panicles of dull red flowers. Varieties include P.t. purpuraeum bronze/purple and P.t. variegatum with yellow and green stripes. “Aurora” has colourful stripes from red to yellow.

Phormiums seem to stand up to anything except hard frost. Richard Mortimer describes it as “disdainfully impervious to howling gales and the poorest sand.” They are among the real pioneers.

They make an excellent windbreak as they will withstand salt-laden gales. So put ’em in as part of the first line of defence. There are some magnificent lines of Phormiums on Penzance seafront.

They take up a lot of room.

In spring, sow seeds or divide. 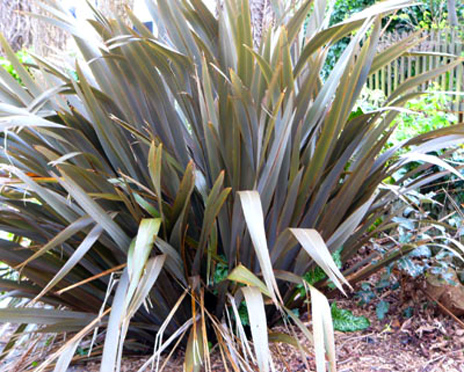