What they're doing, and what you could be doing, now

All the hanging baskets, troughs, growing bags, and Amberol units have been put out at various locations around Penwith and a maintenance programme of watering and feeding is being carried out. Hanging baskets are being watered three times a week with a liquid feed 3.1.3 16% nitrogen. Fuchsias are pricked out and plants deadheaded as frequently as possible. This routine will carry on until the summer is over, usually mid to the end of September depending on the weather. We will be working towards the Britain in Bloom South West judging which takes place some time towards the end of July.

Flower beds and borders, including the roundabouts, have to be weeded and we do this by hand using a scratcher to loosen up the soil and then pull out the weeds. It is preferable to weed the ground when it is moist and to try and get as much of the roots up as possible. Scratching also aerates the soil which bedding plants seem to like. We water the bedding plants once or twice a week depending on the weather.
Thomas the Tank Engine is a floral feature made of a steel frame and planted with Alternathera and Pyrethrum. It will be placed at Penzance Railway Station and this will receive maintenance work - watering and trimming - twice a week throughout the season to keep it looking attractive. 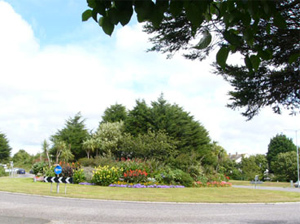 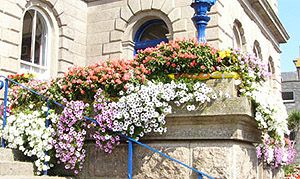 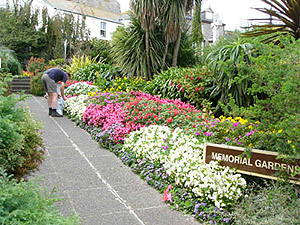 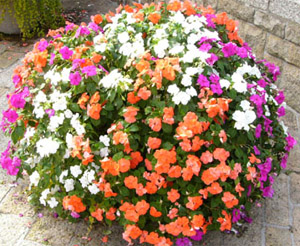 Here at St Ives it's peak season and we are busy maintaining our floral displays and gardens. Due to the recent dry spell, emphasis has been put on watering beds, lawns and baskets. Some beds, where there is no immediate access to a water supply, have been replanted using sustainable plants which need little or no maintenance or watering: shrubs such as Hebe, Phormium, Potentilla and Agapanthus to name a few.

To retain moisture in the ground and keep weeds down, we put down a membrane around the bed and then put either gravel, bark chippings or recycled woodchip on the top to finish off. Judges for Britain in Bloom like to see recycled woodchip as this is included in the judging criteria.

One most recent project has been the Sensory Garden in Trewyn Garden, St Ives for the visually impaired and they can touch and smell all the different aromas of Lavender, Rosemary, Mint and Bay. This project was looked upon favourably by the judges when they visited the gardens for the European Entente Florale competition.
Also found in Trewyn Garden is the ever popular Echium. These tall plants, which seed themselves, have a bluish flower and dark green foliage. In two years they can grow to almost 20 feet, when they seed themselves and then collapse and die. It is thought that Echiums originated in the Mediterranean and came here thanks to birds. It is a very attractive and unusual plant and looks as if it wouldn't have been out of place in the Jurassic era.