Gardening 'on the brink' at a New Jersey lighthouse, USA

Steve Murray is Superintendent of Parks for the seashore town of North Wildwood, New Jersey in the United States. The town is located on a barrier island about threemiles from the East Coast Mainland. He has designed public parks and gardens as well as private landscapes for 30 years in the harsh coastal environment. His opus is the Park and Gardens that surround the historic Hereford Inlet Lighthouse. His work there has garnered many awards and honors including several from the Pennsylvania Horticultural Society and the Victorian Society of America. His ideas were very much influenced by the great British Gardeners past and present including Gertrude Jekyll and Penelope Hobhouse. He also serves on the board that operates the Lighthouse and is editor of its newsletter.

The Hereford Inlet Lighthouse (built 1874) was designed by the U.S. Lighthouse Board's chief draftsman Paul J. Pelz. Pelz would later gain world wide attention as the designer of the breath-taking Library of Congress in Washington, D.C. It is a truly unique Lighthouse, constructed of wood and designed in the Swiss Carpenter Gothic Style. Hereford looks like a large private beach house with a square tower coming out of the roof of the second floor. It is referred to as The Victorian Lighthouse because of its Ginger bread ornamentation.

The bright beacon atop Hereford guided mariners from 1874 to 1964. At this time, modernization caused the structure to be shut down and replaced by a new light on an iron skeletal tower behind the Lighthouse. The old Lighthouse sat unmaintained and forgotten for almost 20 years. In the 1980s after tireless efforts by the Mayor and his wife, restoration of the deteriorating building began. In 1986, the Lighthouse was opened to the public as a museum of local maritime history. Its beacon was reactivated and once again it became an active aid to navigation.

It was at this time I was asked to do something with the grounds. I had an idea and began a project that would take the next five years to complete. My plan was to develop the grounds into a small park with many different garden areas. The Lighthouse property at this time was just a sandy lot covering less than one acre. It sat right next to the crashing Atlantic Ocean and was almost devoid of plant life. Only a wall of huge boulders stood between the surrounding grounds and the sea. I knew this would be quite a challenge. In my mind though, the vision of this beautiful building at such a breathtaking location, surrounded by gardens, kept me very motivated.

The first order of business was to bring in top soil for the planting that was to come next. I dont remember how many tons but it was quite a bit. My next task was to create some protection, a buffer from the salt spray and persistant winds off the ocean. Japanese Black Pine (Pinus thunbergiana) is the most salt resistant tree that I have found. I planted these along almost the whole perimeter of the property. Under them were planted native Inkberry Holly (Ilex glabra), native Viburnum (V. Dentatum) and several cultivars of Hydrangea. Additional buffer plants used were native Beach Plum (Prunus maritima), Hollywood Juniper (Juniperus chinensis 'Torulosa'), Salt Cedar (Tamarisk chinensis) and the wild beach rose (Rosa rugosa). A white picket fence in front of these plantings set things off nicely and also provided more protection.

To further help in protecting the gardens from the elements and also to add interest, I broke up the site into individual garden rooms. This also made the park seem much bigger than it is. A visitor would have to turn an intentional corner, or go through a gate or arbor before catching a glimpse of the next room. Grass paths, stepping stones and a low level boardwalk lead folks from one area to another. The individual flower beds were planted in the planned to look unplanned cottage style. In fact, the entire park is designed with Victorian elements to complement the time period of the Lighthouse. Seated arbors, urns, small statuary , ornate bird houses and benches are placed strategically around the grounds. A large gazebo and brick courtyard are the main focus in the front section of the property and a herb garden surrounded by clipped boxwood is the central focus in the rear.

The gardens have grown to include over 200 different plant varieties. The most seashore hardiest are planted between the stone seawall in the back and the rest of the gardens. Some of these tough plants include Portulacca (P.oleraceae), Marigolds (Tagetes ), Gazanias (G. nivea) and Nasturtiums (Tropaeolum majus). Perennial flowers include Montauk Daisy (Chrysanthemum nipponicum), Jerusalem Artichoke, Sunflowers (Helianthus tuberosus) and Indian Blanket (Gaillardia). Ornamental grasses are also planted here to give a nice transition from the more formal gardens to the beach front area where native beach grasses are found. Ornamental grasses include Maiden Grass (Miscanthus sinensis), Pampas (Erianthus ravena), Fountain Grass (Pennisetum alopicuroides) and Lilly Turf (Liriope muscara).

The most delicate plants are located in the main cottage garden on the leeward sied of the Lighthouse. This is also where the largest variety of plants are found. Among these are Bee Balm Monarda (Labiatae), Bell Flower Campanula (Campanulaceae), Dahlia (Asteraceae), Joe Pye Weed Eupatorium (Compositae), Obedient Plant Physostegia (Labiatae), Phlox (Polemoniaceae), Sidalcea (Malvaceae), Veronica (Scrophulariaceae) and many others. The Hollyhock is one of my very favorite plants and there are dozens of many different cultivars here. It is the signature flower of the Lighthouse gardens and I am happy that I have resurrected interest in this old plant. I have given seeds to visitors from all over the country. These plants love the soil here, although they have to be staked. I have measured one at 14 tall!

Now at almost twenty years old, the gardens have matured nicely. Every year I experiment with new plants and have even started to use some tropicals that I overwinter in a greenhouse. The park has become a sort of proving ground for those wishing for success in their seashore garden, never an easy task. Come and learn from my mistakes I always say. 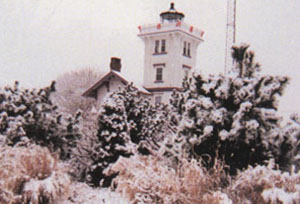 Winter: the lighthouse in snow 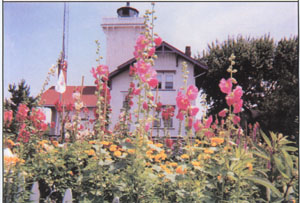 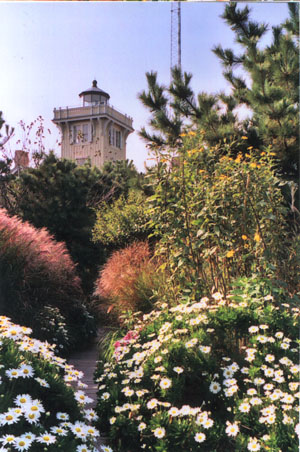 The lighthouse tower, from the gardens 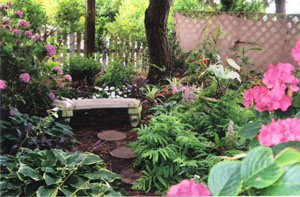 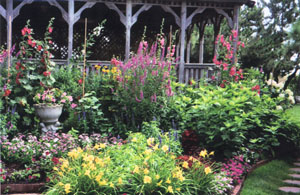 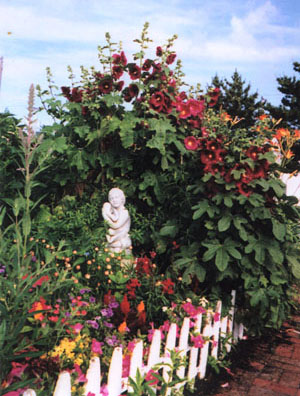