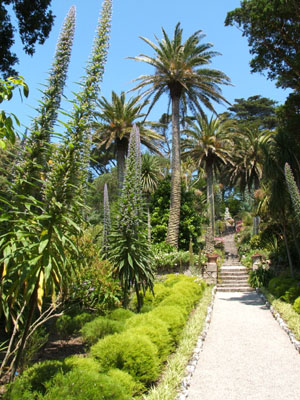 Gardening on an Island:

Mike Nelhams first went to Tresco on a garden scholarship as a student in 1976: he returned in 1984 as Head Gardener, eventually becoming its first Curator. He trained at the Royal Horticultural Society Garden, Wisley; Merrist Wood Horticultural College, Surrey and Plumpton Horticultural College, Sussex. He is an RHS judge on the tender plants committee judging regularly at RHS shows and is a frequent lecturer throughout the English speaking world. He has published many articles as well as a book, Tresco Abbey Garden and has made many appearances on national TV and radio. He is a Fellow of the Institute of Horticulture. He has a particular interest in plants from the Mediterranean, regularly leading garden tours to many associated coastal regions of the world from the south of France to Japan. He is married to Isobel who was born on the islands as were his two daughters Maxine and Katie.

Drought conditions in the summer, wind and salt gales in the winter! Not the usual recipe for the most ideal of gardening conditions but here at the Abbey Garden on Tresco in the Isles of Scilly the extraordinary collection of plants flourish in these supposedly adverse conditions. From succulent Aloes and eye-catching Proteas, both natives of South Africa, to monumental New Zealand Christmas trees, Metrosideros excelsa: throw in an annual rainfall of thirty inches and an almost frost free winter, and the combination is breathtaking. 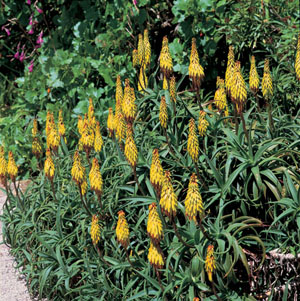 
Many gardens in Britain in the winter months are lacking the colour of flowering plants: happily for Tresco this is not the case. In fact on New Years Day we make an annual flower count and find well over three hundred different types of plant in flower, with some at the peak of their powers. South African plant species on Tresco will follow the same flowering period as in the Cape with many Australian plants also following suit. We have, as an example in the garden, over 70 different species of Aloe, most at their best in late December and January alongside numerous species of Protea, all in full flower. Large boisterous clumps of thick succulent Aloe arborescens covered in bright red flowering stems jostle for position with the King Protea, its magnificent orange and red plate-sized flowerhead leaping out from its glossy green foliage. Acacia , Hakea and Grevillea from the East coast of Australia are rampant with flower on our top terraces taking advantage of the winter sunshine, giving a floral display that seems out of place in an English garden.

When the gardeners of the Abbey Garden get together for a spot of planting, the conversation does not always follow the usual lines of soil fertility, pruning techniques, soil pH, or when was it fed with rich manure; instead they discuss how it will stand up to the Force 9 westerly in January or cope with dust bowl conditions and a drying sea breeze in August. Funnily enough the answer is always positive. There is probably the widest plant range to choose, from many countries of the southern hemisphere. If we do happen to have the occasional failure then something is always bustling up from behind to take its place  whether it be an architectural Echium pininana from the Canary Isles or the Bird of Paradise, Strelitzia regina, from South Africa. April and May will bring an explosion of flower spikes more associated with special effects than the gardening world: Puya from Chile, Furcraea from Mexico and Agave from North America all will draw skywards with enormous flowering spikes growing feet in a day. 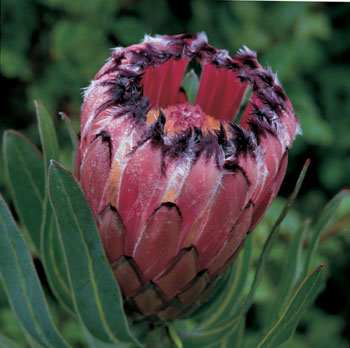 When spring descends upon any garden there never seems enough time for the host of tasks that present themselves. Tresco is no exception. Early in the season clipping and pruning our evergreen oak hedges (Quercus ilex) is one of the more important tasks. Throughout the winter months these forty-foot high giants comb out the salt spray from passing Atlantic gales and by March are ready for a spring haircut. It is no easy task clambering around a ladder on something that resembles the north face of the Eiger, one hand holding on tightly to the hedge, with the trimmer in the other. A dozen of these high hedges are scattered about the garden and can take up to six weeks to complete, weather permitting.

Another altogether more pleasant high altitude job is the cleaning of the Canary Island date palms and removal of old leaves and debris that come from the many nesting birds that make use of the multi-layered leaf arrangement  always bearing in mind that the base of the leaf is covered in nine inch spikes resembling knitting needles, and when falling, need to be avoided!

Also at this time of the year, the gardeners are sending out small packets of over eighty different types of seed to botanic gardens all over the world. Through the previous season, seed from the garden is collected, cleaned and stored ready for despatch, and in this way with free exchange the plant collection is maintained. Meanwhile, seeds for the garden arrive from botanic gardens all over the world on a regular basis: perhaps an interesting package from Phoenix Desert Garden one day and one from Christchurch, New Zealand the next. But when these types of plants reach maturity the spring and summer flowering patterns do not follow the rules. February and March will see the arrival of shrubs Echium and Cytisus from the Canary Isles.

Spring also means the arrival of garden visitors on Tresco for what we call our Garden Weeks. Small groups of perhaps twenty people will stay at the Island Hotel for a series of garden lectures very much relating to our particular brand of gardening. It can be quite fun, squeezed into our atmospheric potting shed on assorted garden seats, debating the choice between mist benches or cool frames, taking time to duck as the local birdlife swoop about the rafters searching for potential nesting sites. Of course in the evening it is time to dress up for the formal lecture of the garden week; and afterwards at the Hotel, a five course dinner (with local vegetables), a glass of Chardonnay and a lively discussion with the group is always a good way to finish the day. Whoever said gardening didn't pay? 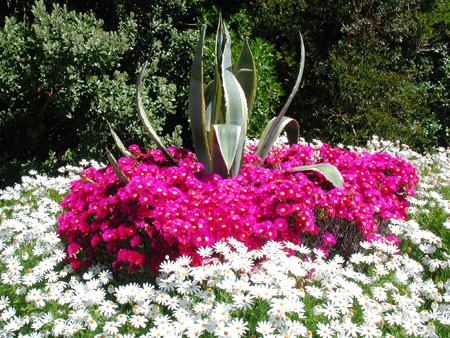 In July and August the gardeners will awaken a little earlier than normal and descend, (or sometimes ascend), upon the sand dunes around the beaches like the Mongol hordes  you get the picture? Armed with secateurs and tractors, they cut and collect thousands of naturalized Agapanthus blooms to send to Britains flower markets. Nothing can touch the sight of Tresco and Scilly on an early summer morning when the weather is right  and if sometimes it is not, what are oilskins for anyway?!