Charlie Pridham runs a small nursery with his wife Liz, specialising in Climbing and Conservatory plants. Situated at Roseland House, in the village of Chacewater, near Truro, Cornwall. As well as running the nursery they maintain one of the NCCPG's National collections of Clematis viticella cultivars and open their one-acre garden to the public on Tuesday and Wednesday afternoons from April to September. Formally a merchant navy officer, Charlie left the sea 20 years ago and the nursery is now a full time occupation. Pride is taken in propagating all the plants the nursery sells, which by definition focuses on those plants which do well in Cornwall as all the stock plants are to be found growing at the garden, and can be seen on their web site at www.roselandhouse.co.uk

For coastal, read windy, this is often the reality of gardening near the coast. Those of us of more modest means are unlikely to be able to employ the classic Cornish solution of shelter belt planting with tens of thousands of trees, yet without some shelter growing climbing plants in such windy situations can be problematic. You could of course simply not grow them, but this would mean missing out on those benefits that climbers in a garden can give you, they create height, can be used to screen or soften hard structures, plus they bring flowers and scent to eye and nose level, and they can do all this while occupying very little space at ground level. So what to do? Well even small gardens can afford some space for a good coastal hedge to help filter the wind; if you choose something like Camellia you will have flowers as well. Plus once the hedge is established, there are many climbers such as Clematis that are herbaceous in habit (dieing back to the ground in winter) that can be used to cloth the lee side, and make it very much part of the garden, after all if a plant is not around during the winter when the worst weather occurs then it can't be damaged! However no hedge is going to be big enough to do the job on its own (especially if it has to be kept low for the view!) The following are some pointers for avoiding problems. 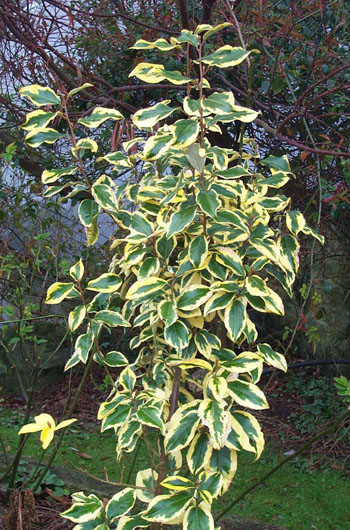 Any free standing structures should be substantial, if of wood it should be preserved, and its a good idea to avoid straight lines, change direction at each post. A trellis that has several ninety degree kinks in it is far less likely to be flattened by the wind, nor will the wind be able to whip down the length of it if it naturally forms a series of sheltered pockets. Planting can also include some good coastal evergreens such as eleagnus x ebbingii and pungens varieties woven into and kept pruned back to the structure making a sort of "Fedge" this again provides more shelter by filtering the wind. These internal barriers can be useful to subdivide the garden without sacrificing many yards to substantial hedges, and can themselves provide quite a degree of wind shelter for other plants. Other plants good for these 'Fedges are the Hollies (Ilex aquifolium cvs) especially the non- prickly sorts and Euonymus fortunei and japonicus varieties. All these suggestions are evergreen and will stand regular clipping, the various cultivars have a huge range of leaf variegations and colours, some even have scented flowers.

Walls in windy situations can become killing zones for plants if they are allowed into contact with the hard surface, so any supports, wires or trellising should be three inches (75mm) out from the wall surface. And again it is important to prevent the violent and damaging swirls and eddies the wind can cause on walls, to do this make trellis buttresses at intervals along the wall sticking out ninety degrees a couple of feet, these can also be used as frames to grow evergreen hedging plants as "Fedges" as described above.

Grow suitable plants, not everything will grow at the coast, but a surprising amount does. Plants I know are good are Ercilla volubilis, an evergreen from South America that has scented flowers in March and April and is a big grower. All the Honeysuckles, there are at least a dozen of the climbing Lonicera's with scented flowers that will grow quite happily if not allowed to dry at the roots, the best of which are probably forms of our native woodbine Lonicera periclymenum, there are many of these, my favourites are 'Graham Thomas' which is tall, and 'Sweet Sue' which is shorter and bushier, all of course very scented. Parthenocissus tricuspidata or Boston ivy, but bear in mind that it is the colourful autumn leaves that are its main attraction and if you are in a windy spot they are likely to be last seen heading out into the Bristol channel! There are varieties that will have good colour all summer too, like 'Veitchii' and 'Beverly Brook' so look out for those. I am particularly fond of roses and the wichuriana ramblers bred in the early 1900's are very good in windy and salty places as they have flexible stems and shiny leaves, varieties such as 'Alberic Barbier' and 'La Perle' are white, while 'Alexander Girault' is a strong pink, and in between are some of the most beautiful climbers in my garden such as 'Paul Transon' apricot pink and 'Rene Andre' pale pink and white. All are scented. 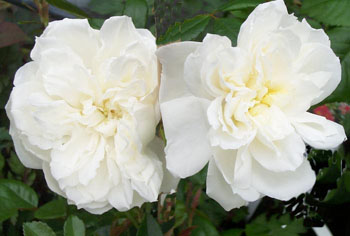 It is all too easy to concentrate on the disadvantages of coastal gardening, but there are advantages too, such as the ability to grow outside, without protection in almost frost free conditions, a range of climbers, that I, just five miles inland, can only dream about! Try Hibbertia scandens; with its shiny evergreen leaves and large bright yellow flowers all summer, this Australian climber thrives in Falmouth and on St. Michaels Mount, ignoring both salt and wind alike. So look around and take note of what is growing (and what is not!) do the groundwork and enjoy your garden with the added benefits of climbers. 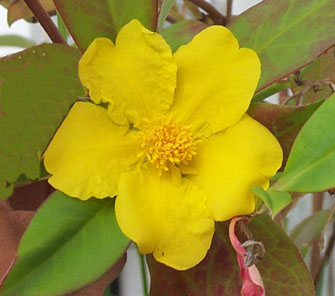