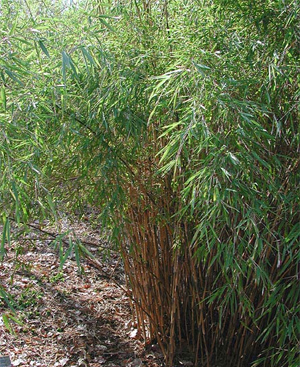 Michael Bell has been growing bamboos for over 40 years. He is President of the Bamboo Society (EBS Great Britain), which he helped to found. His collection of over 260 temperate groupings includes one of the National Collections of Phyllostachys cultivars. His garden has been featured in television programmes and garden journals. He has contributed to a number of books, and was guest speaker at the American Bamboo Societys annual meeting in Atlanta. His book The Gardeners Guide to Growing Temperate Bamboos was published in 2000.

It comes as a surprise to many that England, and Cornwall in particular, is one of the best regions in the world for growing temperate bamboos. Temperate bamboos originate from two major climatic conditions, the damp humid mountain areas of the world and the lowland regions of China, Japan and adjacent islands.

Cornwall's mellow, humid climate suits the mountain species admirably. The genus Fargesia represents the very hardy types, some growing way above the tree line at 4000m elevation and are among the most hardy of cultivated plants. These are ideal in the garden as they have a clumping rootstock and elegant form. Species can be selected that grow to final heights varying from 2m (6ft) to 8m (26ft) and they are very tolerant of our windy conditions. At lower elevations are the genera Thamnocalamus, Himalayacalamus, with Drepanostachyum found at the lowest elevation of the sub-tropical forests. The Thamnocalamus are reliable in southern England but the other two genera need Cornwall's special climate and a sheltered location. All are even more delicate-looking than the Fargesias , and have a tight clumping rootstock. Fargesia murieliae is easily available and good and Fargesia rupa if a smaller plant is required (to 3m).

Whilst the mountain species are mainly clumping genera those from the lowland areas are invariably those with running rootstocks, and can be invasive. As a very broad generalisation the weather in these regions is cold and dry in the winter and hot and wet in the summer, when compared to Cornwall. Plants adapt to these limitations to varying degrees but our cold dry summers often restrict the size of the plants and the activities of the rootstock, particularly on a shady, dry, or infertile site. This is no great disadvantage in most gardens. 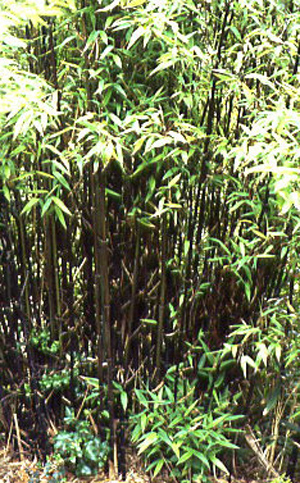 Lowland China is the home of the Phyllostachys. Members of this genus are easily recognised as large robust plants with two stout branches as each node. They also have a distinct longitudinal groove on the culm (or cane) above each branch bud. Even in this country species can be selected to grow 9m (30ft) with culms 5cm (2ins) diameter and they can form a small grove if desired. Another distinction of this genus is that the chlorophyll in the bright glossy culm surface often mutates to give various rich colour combinations of yellow and green, all yellow, black, or various brown patterns. Cultivars with variegated leaves are also available. The Phyllostachys bambusoides cultivars are generally best for colour but make large plants, while the Phyllostachys nigra group are best for black or brown combinations. Phyllostachys nigra `Henonis', Phyllostachys nigra `Boryana', Phyllostachys dulcis , Phyllostachys vivax and perhaps Phyllostachys edulis are good for forming a grove. Although the latter gives the largest plant it is also unpredictable and temperamental.

The regions of Japan, Taiwan, and adjacent islands grow tough plants capable of withstanding coastal gales but they are also some of the most invasive of all bamboos. The large leaved small bamboos of the genera Sasa, Sasaella , and Indocalamus are ideal for producing a tropical effect in a garden but they should be avoided in all locations. Some have taken over whole valleys of large gardens, as at Penjerrick, and are completely unsuitable for most domestic situations. For similar reasons avoid all small bamboos for sale in the garden centre sold as `dwarf bamboos'. Most of these can grow to 1.5m (5ft) or more and have similar invasive properties. Semiarundinaria fastuosa and Pseudosasa japonica and a few other species, although runners, can easily be controlled, and form idea windbreaks or hedges. Shibataea kumasasa is the only dwarf bamboo to be recommended but this is also a runner and needs some control.

Bamboos are quick-growing in a vertical dimension and can reach 4m (13ft) or more in three years with textbook cultivation, so you do not need to buy large plants for instant effect. The best garden bamboos are the clumping genera but these grow only slowly at the root. Root division is the only method of propagation, as cuttings, layering, and other normal techniques of mass production are unsuitable. Invariably therefore desirable species are produced in small quantities and can be considered expensive; but when compared to other choice shrubs or trees this is not so. Avoid all cheap plants or those that the neighbour wishes to give away or you will only perpetuate the myth that all bamboos are weeds.

Bamboos need no special growing conditions except that they should not be allowed to become dry at the root until established. This is usually for the first year. They are happy in shallow or poor soil with any pH value. Apart from the obviously delicate-looking species they are very wind tolerant, although strong east winds can cause leaf scorch and some Fargesia s can lose most of their leaves from severe winter wind stress. 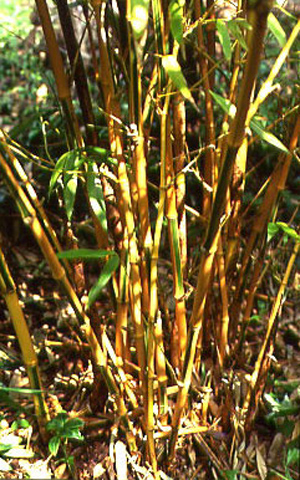 However, although they will tolerate poor conditions they will modify their growth to suit. Poor conditions will give slow growth, small plants and a small root system. Even running species will often behave as clumping plants. Conversely if you require quick results, large plants, or a grove effect, bamboos will respond like few other plants to good growing conditions. If you provide good fertile soil full of organic matter, ample irrigation, good drainage and an open site with full sun to the roots, you will be amazed at their response. Bamboos are shallow-rooted, so any manure should be supplied as a mulch and when growing well, they seem to be able to accept any amount of fertiliser. In locations where there is likely to be standing water at times, plant on a raised mound.

Bamboos are a sub-family comprising over 600 genera, growing in all continents except Europe and Antarctica. They are therefore a diverse group. Some are ideal as specimen plants, where their height is constant after a few years, some as hedges or open visual screens and some add height to a border. Most other evergreens have thick leaves; bamboos have delicate leaves by comparison and they rustle in the wind like few other plants. They do not starve the soil and can be trimmed once a year if their height is excessive.

It is essential to know your plant when selecting a specimen to suit your requirements. Be advised by a specialist nursery, not a general nursery or garden centre. Alternatively get a good book, e.g.. `The Gardeners' Guide to Growing Temperate Bamboos' by Michael Bell, ISBN 07153-1581-1. Remember that most plants generally sold are propagated by companies where speed of growth is as equally important as sales appeal and will tend to be those with an active root system. Best of all visit gardens growing mature specimens. Carwinion at Mawnan Smith displays about 130 species and forms and my garden at Wadebridge displays over 250 and contains a National Collection (ring 01208 812892 for directions). Plants can be bought at both gardens although rare species may be propagated to order.

Make sure that you get the qualities that you require and your bamboos will then be an asset to any garden, whether it's a small backyard or a large estate. 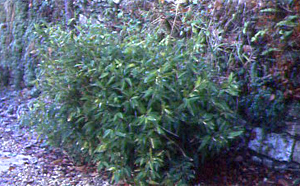